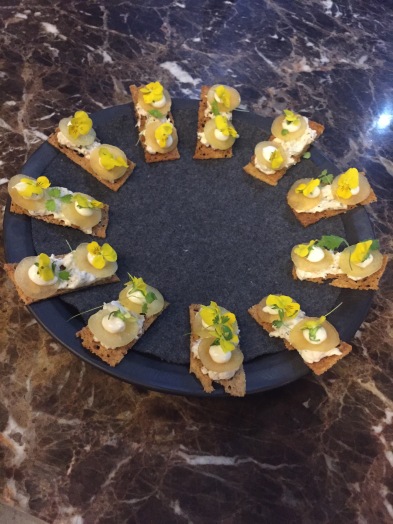 Chef Clinton Mclver’s tasting creations are the name of the game at Armadale’s newest Australian restaurant. The food reflects the beautiful art creations on the wall and the clean minimalistic trendy look throughout this 34 seater restaurant. Initially you look at the dishes that keep coming and you wonder why the chef would want to give you half portions (which is not a generic norm here in Melbourne where many chefs seem to want to load your plate so you feel overloaded when you leave).  Don’t be fooled each small serve packs a punch — and is not only easy on the eye looking like a work of art, adorned with either micro herbs or micro flowers, each dish is complex and has been skilfully created by Clinton and his team, from the creating to the team’s skill at plating— skilfully adding their elements to create a first class dish. It is easy to feel comfortably full and well rested at the end of your evening and certainly not feeling the need to hit your local ‘maccas’. 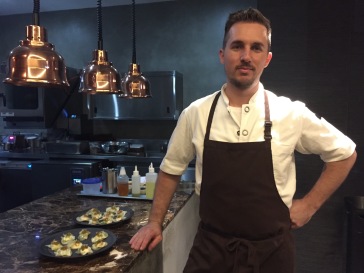 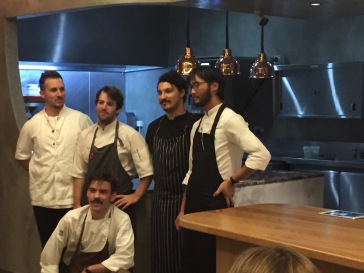 You might feel that you are on the movie set of Bradley Cooper’s recent culinary drama ‘Burnt’ where he portrays a fictitious character called Chef Adam Jones who is obsessed about obtaining his 3rd Michelin Star. It is safe to say that whilst the plot could be stronger the movie delights in showcasing art on a plate — both sophisticated and yet classic,  his creations finally develop by hiring the best of the best from other restaurants bringing in new techniques. –Amaru’s Chef Clinton would certainly not be out of place on this movie set — his culinary team share his passion. Leading the kitchen brigade is Clinton ex Vue du Monde having trained under Shannon Bennett and Corey Campbell with his Brazilian partner Ali Rolim Correa thereafter introducing a new look menu at Clayton Bowls Club a three chef hatted restaurant.

The name Amaru derives from an aboriginal term “Amaroo”, which means “beautiful place”, and the Portuguese word for love, and as with the food there’s much to love about the presentation from the open kitchen to the table.

Even the most sophisticated palate will be delighted with new entries on a plate such as Heirloom tomatoes stewed with marron heads used for a sauce in which a rainbow of tomatoes and spicy muntries (Australian native cranberries) served with fresh baked bread and cultured butter served on slate. Roasted Wallaby bones are used to infuse Ike Jime Bass Grouper with Sea Grapes and Funon. For your grand finale  –like no other —the Buffalo mozzarella Ice-cream filled with sun-dried strawberries with a drizzle of fruity cold pressed olive oil and finished with olive dust. It seems your taste buds are having a party in your mouth as each taste awakens new emotions.

Masa Nishimoto is the sommelier and infuses his Japanese traditions into the paired wines culminating with a quality 2013 Emishiki Monsoon Yamadanishiki cold sake, Shiga, Jpv to round off the nights tastings.